When last we left our hero, she had just filed for copyright.

....thaaaaat's pretty much where I'm still at.

I'm holding off on making any changes to the book that aren't technical until I get at least a few more reviews back, so let's talk about something else today.

Saturday will the Rocky Mountain Naginata Federation's annual seminar and kyu testing. I'll be testing for my san-kyu (you're welcome). For those of you not in the know, naginata is a Japanese martial art made especially for women. Specifically because the length of the was useful for keeping male attackers at a distance so their (usually) larger size wouldn't put the female at a disadvantage. They were generally used by women of samurai culture to defend their homes while their husbands were at war. Later on, they evolved to a status symbol and were used as part of a woman's dowry. The weapon itself is basically a pole with a big ol blade on the end.

A modern, sport naginata (formally called atarashii naginata) is what is typically used today. The metal blade is replaced with bamboo. It cuts down on lost limbs.

I'm part of one of the only naginata schools this side of the Rockies. They are really quite rare. Currently in my class there is just me and one other, plus our instructor. Our actual sensei is all the way down in Tennessee. Our seminar this year will have a whopping 9 people. Yeah. We're a small, wide-spread group.

I started my lessons about a year and a half ago and we've had students come and go and come back and go again. It's a hard art to get into. It's a slow art. You may spend an entire month perfecting a single strike. It's perfection first, promotion second. I don't progress with half the speed I did when I was in tae kwon do, where we had a test every couple of months. No, I test maybe once a year.


Sometimes it gets tedious, but when you see the people who have been doing this for decades, it shows. They are lightning fast, fluid, and just amazing to watch. It gives me the motivation I need to keep practicing when I get in a slump. 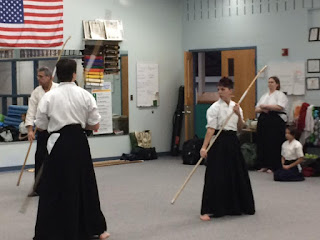 We also do the occasional demo. Our regular show is at the annual Cherry Blossom Festival in Nashville, TN. We have a booth and do a couple of demonstrations to show off and educate people about this rare art. If you've never been, I recommend it if only for the food. 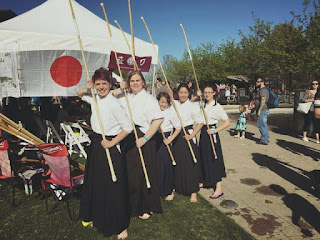 If you're interested in learning naginata, let me know, I may be able to connect you with a school near you (or at the very least someone else who practices). Like I said, we're a small group, so the more the merrier. Or you can check out The US Naginata Federation for more information.