The Story Behind the Real-Life Ino 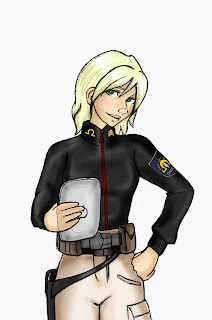 I got an email from an old friend the other day and it made my day. It was from one of my oldest internet friends and one of the very few online friends that I've had the pleasure to meet in real life (it's doubly impressive because I traveled all the way to Italy to meet her). This particular friend is also the direct inspiration for Ino in my books.

Yeah, Emanuela has been my friend for a long time and though we don't talk as regularly we as we used to, it's nice to know that after almost 16 years we're still friends.

So sit back, get comfortable, and let me tell you the tale of how a much younger me made one of the best stupid decisions of my life.

Since the dawn of time parents have told their kids to be wary of strangers, and when the internet rolled around the warnings became even more frequent because we were now conversing with strangers online on a daily basis and it's easy for someone you think you know to be someone very much not.

The year was 2006. I was still wearing Kikgirl jeans, watching Naruto, and living alone with my two cats, Ed and Winry. I was 25. I like most nerdy young women my age spent most of my free time chatting online with other nerds. That's how I met Emanuela-- on a Naruto fan blog on Livejournal. It didn't take long before we realized we had a lot more in common than Naruto. We'd talk about movies, music, and whatever other fandoms we were into at the time. She (along with about half a dozen others) read one of the first versions of Paige's Story that I ever wrote and got to meet all the characters you know in their... infant stages.

One night (night for me, early morning for her because Italy) I was telling her about how I'd love to visit Italy one day and she immediately offered me her couch as a place to crash should I ever visit. Now, most rational, cautious people would be all "Thanks. I appreciate it." and never revisit the subject. Not me. Nope. I crunched numbers, budgeted, and booked a flight to Italy that November with full intent of being picked up at the airport by Emanuela and crashing at her place.

This could have easily gone south in a bad way, but it didn't. When I arrived in Florence I was greeted by 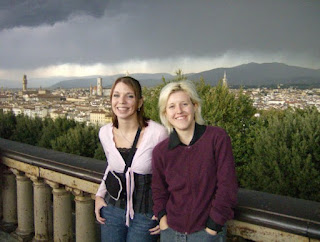 a tiny little blonde Italian lady who drove like a bat out of hell and said "Ow-zum" instead of "Awesome". And we had the best goddamned time. My friend Emily flew over and joined us a couple days later and we spent evenings at cafes and bars meeting Emanuela's friends and colleagues. We saw all the typical sites, but it was the nights drinking and talking that were the best. The open cafes and dark bars and over all slower pace are what made me fall in love with Italy.

When I got back we made a point to send each other care packs every year-- she'd send me all kinds of chocolates and amaretti from her home town in Liguria (amaretti which make an appearance in Tales of Fort Thomas) and since Italy had basically every kind of American chocolate bar available already, I'd send her things like hot sauce, caramel popcorn, and Girl Scout cookies. We still exchange packages, though not as regularly.

When Ben and I got married in 2009, we decided to have our honeymoon in Rome and managed to take a train to Florence to see Emanuela and she took us out to a wonderful steak Fiorentina dinner and we got to catch up in person for an evening.

It's 2021 and we still keep in touch, even if it's just a quick email to say hello every few months. I was only 25 and had never traveled anywhere alone let alone to another country where I barely spoke the language and there I was, with my broken Italian, meeting a total stranger. It was a stupid and dangerous decision and I don't regret a single second of it. ...Actually that's not true, I regret not bringing proper walking shoes. Florence all day in heels is absolute murder on the ol' feet.

Come On Down To Cornfield-- I mean, Batesville!

Hello everyone! I know I've been really quiet on the ol' blogger lately. I'm sorry. But, here are some updates. The launch of Tales of Fort Thomas went well. It's been almost 2 months and, so far, it's being very well received. 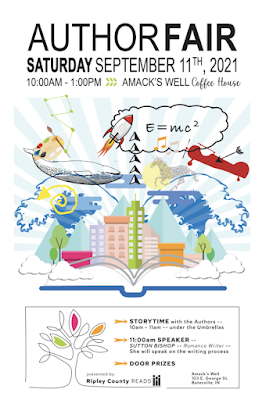 Second: Book Two... like the official book two of the Fort Thomas Series... is moving along at a really nice clip. I'm 17,000 words in and at this rate I'll have a first draft by the end of October. In Book Two we pick up with everyone six years after the events of Paige's Story. Paige and Nikki are all grown up-- Paige is in bootcamp to become a scrapper and Nikki is interning at the Jane Research Center at Fort Thomas. There are lots of new characters to meet and new problems to overcome both on individual character levels and in the world around them.

Third: This Saturday, September 11th I'll be taking part in the Ripley County Reads Author Fair along
with my husband, the award-winning Benjamin W. Bass. We'll have a table with books and I'll have some merchandise. There will be lots of other events happening that day too-- the Farmer's Market is just down the road (it's really nice), there will be story time for the kids under the Umbrella Sky art installation, and you'll be a hop skip and a jump away from The Big Four Cafe where you can grab a bite to eat. (Reservations are not necessary, but generally a good idea on the weekend as we tend to be really busy.)

I'm really excited for this author fair. I've got cool new Game Ender buttons that I'll be giving away, a fancy pants banner, and more books than you can shake a stick at! Also, Amack's Well is one of my favorite places in town. I'm there every week with my friend and fellow author, Paige Gray, and we talk about our books (she's writing an historical fiction series), and vent about life. It's where we take the kids after flu shots and other unpleasant things to take the edge off, or sometimes we just drop in on a nice day for a treat. It is a lovely place.

So yeah, come on down and see the town I call home.