I've Got a New Book and Am Watching Grumpy Old Men

So I'm supposed to be writing this blog post to talk about my upcoming book but my husband is watching Grumpy Old Men on HBO and I've never seen it before and, well... it's really good. So my attention is a little divided at the moment between this and Burgess Meredith being just the best. I mean, Jack Lemmon and Walter Matthau are great too, but Burgess Meredith is hilarious. I honestly can't believe I've never seen this movie.

Anyway, where was I? Oh yeah, I have a new book coming out. It's about ten thousand words from being written... give or take a shitty afternoon or bad mood. Now, before you go and get your hopes up allow me to just stomp them ahead of time. This is NOT, I repeat, NOT book 2. Sorry. It's not. Book 2 is coming. I'm working on it. But it's going to be a while.

I know, I know, it's been almost three years, but look, I have a day job and kids and depression. Finding time isn't always easy and when I find the time it's not always easy to write... which loops us back around to the depression. Fuckin' asshole. So, I know authors make money by selling books. No, really, we do. I know, it surprised me too. And I have found that the more books an author has, the more likely they are to sell them... especially when they have a loyal fanbase. (Thank you, both of you.)

Well, I don't have a lot of books... yet. But what I do have are a lot of short stories. And you know what you can do with lots of short stories? You Ray Bradbury that shit and put them into a loosely connected collection!

So that's what I'm doing... with sincerest apologies to Ray Bradbury, of course. I'm taking all the Fort Thomas short stories I've been posting on my blog, along with a few others that have never been seen before and publishing The Tales of Fort Thomas.

Why, oh why, you ask? Why can't you just write book 2? I already told you. I am. It's just not as easy as it sounds. Also, six years passes between book 1 and book 2. (Side note, unrelated: I hope the little girl in Grumpier Old Men appreciates that Burgess Meredith sang her a lullaby. Yes, we're onto the sequel now.) Anyway, where was I? Yeah, six years. So, six years passes between books and that leaves a lot of space to fill in.

Look, the truth is, I know what my characters are doing every day down to the minute. It's creepy and it bothers me sometimes. But that's what happens when you've been living in the same fictional world (or a general facsimile thereof) since you were fourteen. I like to think that Tolkien had the same problem, except instead of creating my own languages, I'm creating popular movie franchises and bands for my characters to enjoy. So, apologies also to JRR Tolkien. Instead of Sindarin and Quenya I have Ice Shark 1-5 and groups like Harassing Edward and The Bathtub Marys. Yeah. I'm pretty far gone. 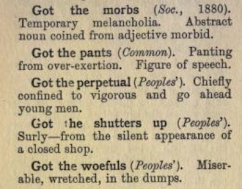 So, here's the thing. Sometimes when I write, I don't actually write. I just stare at the screen all grumpy like... like Walter Matthau. And when I don't write it has been noted by reliable sources (to which I am married) that I get, well... a little affected. Like I don't just shrug off a bad day's work. I get the morbs, and not just the morbs... the super morbs, and believe you me, my depression doesn't need any more fuel for its fire. So that's when my reliable source of a husband suggested that maybe I start to get the word out for The Tales of Fort Thomas by documenting the process. It'll get everyone, hopefully, excited about the book and it'll help me to maybe not be so angry with myself when I don't have a super stellar writing day.

So here we go. The Tales of Fort Thomas is coming by summer this year. It will have a few stories that show you what happens after Paige's story, some that happen before, and one that actually happens right in the middle of the it. You'll get to see all your favorite characters on a more personal level. You'll get to see their private lives... the hardships they encounter, the random shenanigans they get into and all that kind of stuff. I really think you'll enjoy it. If I didn't I wouldn't publish it.

Right now, I'm working on a story that follows Paige and Alpha right after Paige's Story ends. Paige is trying to process her trauma and Alpha is trying to figure out how to be a parent. I'll be posting regular updates with what I'm writing and where I am in the publishing process (hopefully), and hopefully you'll follow along.