So, here we are again with another character spotlight. Last week I highlighted Fer and it seemed to go over pretty well so, let's keep going and put the spotlight on Nix.

Nix is best described as a golden retriever-- Loyal, intelligent, sometimes a little derpy (if he has a flaw, it's that he's not much of a reader, thus a lot of jokes fly right over his head), but he will absolutely rip your fucking face off with no issues if he needs to. 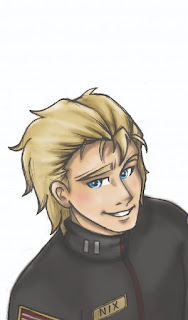 Nix is typically known for being the Captain of the Omega Squad and Alpha's right-hand man. To Paige, he's mostly known as the super hot blonde she has a massive crush on. And, to Fer, he's known as "a fucking asshole" or "you illiterate fuck" or just basically anything unfriendly with the verb fuck as a descriptor. Nix and Fer don't exactly see eye-to-eye on a lot of things. Where Nix is generally calm, rational, and mindful of humans and their perception of synthetics, Fer doesn't care... and that drives Nix insane and the fact that Nix does care, likewise, drives Fer insane.

Prior to Fort Thomas, no one is really sure what Nix did or who he was. His body was found, barely functioning, by scrappers in some back alley in New York. When they brought him to the local Synthetic Repair Center for repair and examination, they couldn't find any record of him in any of the synthetic registries. He has no markings of a manufacturer, he's a custom design (unlike Fer is one in a series of a specific make and model), and when they actually opened him up, found that his Synthetic Registration Number (SRN) had been completely filed off his chassis.

Then name "Nix" was coined there in the SRC-- when Alpha asked what information was found on their newest arrival and the repair tech replied with, "We got nothing, nada, nix." That soon evolved into calling him "Mr. Nix" as sort of a playful formality, to just Nix after a bit. Fer likes to tease him over his lack of memory and origin. No real reason... Fer just likes to give him shit.

Once he was repaired, Nix went through basic training and became a scrapper where it became apparent, that whatever he did before Section, it was probably violent. Nix is a ferocious fighter and that ferocity earned him a bit of a reputation. Combine that with his height 6'4", and you've got yourself one intimidating drink of water. ...handsome as all get out... but still intimidating.

Despite his reputation for being a badass, and kinda scary, Nix is actually a gentleman. He hates losing his temper... which he does more than he likes... Thanks, Fer. He is very polite and always strives to make a good impression Which is why when he first meets Paige after a very heated argument with Fer, and sees that she's actually frightened by him, he tries to make amends. As for Paige and her family, he finds them endearing and a welcome change to all the military brass and scrappers he's usually around. They treat him like a regular person, no pretense, no formality, just Nix-- especially Anita who has no trouble calling him names and smacking him upside the head when he needs it.
Now, I think, if you asked him about Alpha, Nix would tell you that Alpha is his best friend and mentor. But it really goes a bit deeper than that. Alpha is the one who gave Nix a new life at Section, who gave him a purpose, and through that purpose Nix was able to earn respect and status, not as just another scrapper, as but the best of the best. So... if you prodded him a bit to elaborate, he would say he owes Alpha a dept he can never hope to repay, but will gladly spend the rest of his life trying.

So that's basically Nix. He was always one of my personal favorites. Here's a fun fact: in my first draft, he was actually a complete asshole. He was cold, aloof, and violent. But as I wrote I thought to myself, "Why the hell would Paige like someone like this? What the hell kind of example am I setting by trying to glamorize this prick?" So it was either kill Paige's unhealthy crush and let him continue on as a toxic character, or make him a better person. I'm glad I made him a better person.
I have a lot in store for Nix... not all of it very pretty... but I think he'll be up for it. He's got a good family behind him to help him if and when he needs it.

If this is your first encounter with Nix and you want to see him in action, please check out Paige's Story over on Amazon or Audible.
Posted by A.J. Bass at 9:44 PM