Fer is your standard military synthetic. He was born on an assembly line with about 100 other synths who look kinda like him, but not quite. Mirth is one of those other synthetics... they are described as looking like siblings or close cousins if they were human. He's the best marksman at Fort Thomas and knows it. He's snarky, grumpy a lot of time, and likes to drink and smoke.

After the Jane Virus infected him and made him sentient he was assigned to Section's Rho Squad.

Sooo, Rho. Yeah. The Rhos were basically the proto Omegas back in the day. They were the special ops of Section who would go into extremely dangerous situations and put down corruptions or rescue Janes in distress.

It was his first year as a Rho when he got his name. Despite his superior, Sgt Victor 'Hem' Hemingway, insisting he go by Iron Man, Fer opted for the far more subtle and elegant term his Captain used: Homme de Fer, or just Fer for short--Fer is French for iron. Homme de Fer is basically Iron Man. Captain Fabron was a French immigrant with a thick accent who would often slip into his native language... especially if he got riled up. It was his time with Rho where he developed his smoking and drinking habit, thanks to Hem. Even though neither alcohol nor nicotine do anything for him, he continues to do both to this day... mostly to just remember Hem, his first real friend.

The Rhos all met a very unfortunate end during a mission in the Western US. They were out on a search and rescue mission when the Western military ambushed them. Every one of them perished, save for Fer.

Fer had a really hard time coping after the loss of, what he considered, his family. And, let's face it, no one really knows how to help a machine cope with grief. Janes are very similar to humans, but they're not the same. They can't forget things. Their memories don't fade. When Fer remembers the attack that took his squad, he remembers it in such clarity that it's like reliving it all over again. Rho's destruction is what fueled his intentional distancing from humans. To him, they are too fragile and too easy to lose. It's why he won't support humans on the Omegas and why he was so angry when Alpha and Nix went against his advice and accepted Hector Mendoza to the squad... only to lose him.
It was during this time, after Rho, when he happened to meet Melissa Park, who we know as Paige's Taekwondo instructor. She helped him learn to cope with his loss through martial arts, meditation, and by giving him a much needed shoulder to lean on. He loves her and she loves him, but their relationship is complicated at best. The biggest issue being that Fer is literally government property and will be until the day he's scrapped. This means he's never really off duty. He can have his free time and a life, but when Section calls, he listens. He can't pick and choose where they send him or when.

The second biggest issue is that he's obviously not human. Human/Jane relationships are still a relatively new thing in this world. I mean, holy shit, people still freak out over inter-racial relationships or homosexual relationships. Can you fucking imagine people reacting to an inter-species relationship? Yeah. It can get ugly sometimes. They sometimes have to endure ugly glares or words when they are in public together--yeah, even in the progressive East. Thankfully, no one has tried anything physical on either of them... because Fer and Melissa would probably kick the ever loving shit out of them. 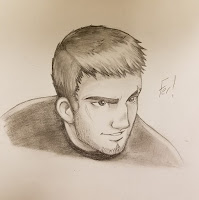 As I said, Fer's not entirely big on humans... except for Melissa. So when Paige happened to cross his path he was less than pleased. Fortunately, or unfortunately, depending on how you look at it, their paths kept crossing and because of this, Paige went from a major annoyance, to more or less tolerable, to (in book 2 and 3) one of his best friends.

Fer has a very acute sense of right and wrong and he knows Janes are treated like shit, no matter how much better they have it in the East than the West. He knows the world is one giant shade of gray. He knows it and he hates it, because he's not sure how what to do about it. After all, he's a scrapper. His job is to put down his own kind when they get violent. He's very thoughtful but his constant thinking and mulling over his lot in life makes him come off as brooding and unapproachable.

In all seriousness, he's got a huge heart-- despite not physically having a heart-- and he will always be there even when things are at their worst.

If you're just now stumbling across Fer for the first time and want to learn more about him, please check out my novel, Paige's Story over on Amazon available in paperback, ebook, audiobook, and on Kindle Unlimited.