Jenkins, The Sky is Falling!

Actually, it's just the ceiling.

This year will be known as the Christmas where the ceiling fell down.

It was 7ish AM today when there was a *WHUMP* not a crash. Not a thud. A whump. It was loud, but also muffled. My first thought was that one of the kids fell out of their bed. The lack of confused crying directly after proved that was not the case. The husband person got up, went to investigate, and came back with the following bad omen: "You need to get up." then he added the even worse omen: "Promise you won't freak out."

I went downstairs and found what made the noise 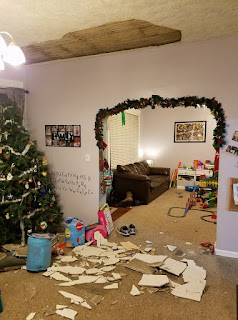 70lbs of lathe and plaster from our 100 year old ceiling had fallen. Now, I now what you're thinking, water damage. Some kind of pipe leaked. OMG call the Mario Bros! Well, the joke's on you. First of all, the Mario Bros. aren't plumbers anymore. Also, the plaster was dry as a bone. .....also, also the pipes are on the other side of the house.

Well, if you're Ben, you call your super handy BFF, tear the rest of the ceiling down, and prepare to put in a new one. 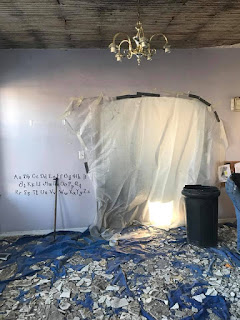 Currently, the kids are at their grandparents' house for the night--it's dusty, cold, the husband and I are waiting for the house to heat back up to a comfortable temperature (I believe in you, you super old furnace, you can do it!), and we're watching Bob's Burgers in a room with no ceiling.

It's a good time, but at least the floor is clean.