This past Sunday Ben and I celebrated our 12th wedding anniversary. 12 years of marriage plus 4 years of dating puts us at 16 years together. Not too shabby. And of those 16 years, my favorite story to tell is the story of our first in-person meeting.

If you wanted to be specific about it, Ben and I met in the comment section of a mutual friend's Live Journal... yes, I'm well aware of how dated that sentence is. It was 2005. My little sister had just died three months prior and I had broken up with my emotionally unavailable boyfriend shortly after. I was not even a year out of college, living on my own in my little apartment in Bloomington with my cat Rosie. At the time I was trying to become a newspaper cartoonist and failing. To make ends meet, I worked at Jiffy Treet East-- a small ice cream shop on the corner of a strip mall just off Pete Ellis Drive. You can still go there today. It's just as good as it ever was.

One day, in my apartment I got a message on AOL instant messenger (yes, dated, I know) from this guy who says he knows me from Live Journal. We chat for a few minutes before I make up an excuse to go, because, you know, strange men on the internet. Over the next couple of weeks, he kept messaging me, nothing threatening or inappropriate, just "Hey how are you? How was your day?" Each time our conversations got a bit longer until I was confident he wasn't some gross creeper. Turns out he just wanted someone to talk about anime and movies with who wasn't a 16 year old.

And that's how we arranged our first in-person meeting-- to exchange anime. I had a copy of Cowboy Bebop: The Movie that he had never seen and he had a copy of Nausicaa that I had never seen. We agreed to meet at Jiffy Treet during one of my closing shifts. I'd have my coworkers around in case things went weird and yeah. He told me he'd be driving a Jeep and gave me a ballpark of when he'd be in.

I spent the entire shift anxiously looking out the front window waiting for him to arrive. Every time a Jeep pulled in, I'd have a miniature heart attack until I realized it wasn't him. Finally around 10pm, a tan Jeep pulled up to the shop and I knew it was him.

He didn't try to hug me or do anything creepy when we met. He just introduced himself and said it was nice to finally meet me. We took a seat at a small table by the neon-noodle sign in the widow (which is still there) and swapped movies. I asked what he was up to tonight and he told me he was going to Bear's Place to watch his friend's band play.

"Yeah, not really. I won't really know anyone there other than my friend and his girlfriend."

Then he asked me what I was doing and said, "You're looking at it. I'll be here until at least 11 to close up."

"Well, they probably won't even go on until 11 at least. It'd be nice to have someone to talk to."

The conversation went on for about twenty minutes or so and in that time he made multiple hints at how he'd like me to go with him to the bar... all of which flew right over my head. Finally, after he had left, I went back behind the counter and co-worker... a big stoner-dude named Chris... looked at me like I had just sprouted an extra head. When I asked him what the problem was he told me, "Angie, I want you to replay your entire conversation with him over in your head and think reeeeeally hard about it."

So I did. My eyes went wide and I felt like a complete idiot. "He was asking me out!" 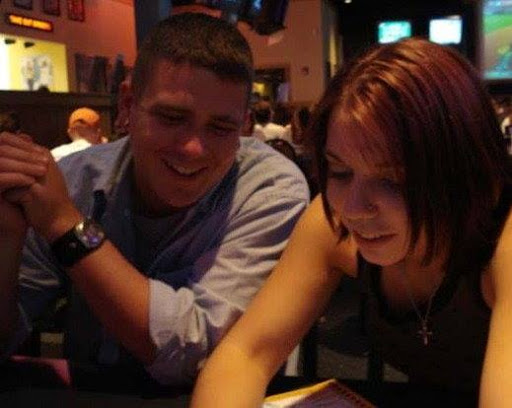 So that was the first time I met Ben in person. I blew him off like some rando. The next day we got in touch and arranged to meet up again. This time at his apartment... where we sat on separate couches, watched Demon City Shinjuku, and ate a Big 10 from Pizza Express. Sooooo... progress?

Despite the slow start, we finally got off the ground. We crash landed a time or two in the four years that followed... he was struggling with PTSD, having just come home from the war and I was struggling with my own issues having suddenly lost my sister... but once we learned to navigate the winds, we really soared... and we've been flying high ever since.

That's how we started. It's our meet cute... our origin story... my favorite story to tell.