Ghosts of Christmas Past


I was not aware this short wasn't on my blog. This is the first of the Tales of Fort Thomas and is bonus content at the end of the audio book version of Paige's Story. If you want to hear Phil Thron take this short (and the novel itself) to another level of awesome with his top notch narration, I recommend you dropping a credit.

Ghosts of Christmas Past
A Fort Thomas Short
By: A.J. Bass 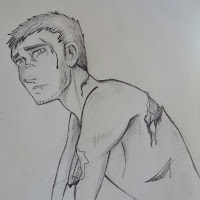 
I’m not in the snow anymore. It’s dark and I’m lying on a bed or cot of some kind. My chest feels...wrong and my boot cycle is sluggish. Despite not being fully operational yet, I hear voices. They’re garbled at first, like they’re talking under water but after a few seconds they start to become clearer.
“Jesus, Hem, whattaya doin’, goin’ and breakin’ the new guy?” The voice belongs to Specialist Grabowski, our squad medic.
“Shit, I didn’t break anything. Don’t you go pinning this on me.”
I try to speak to let Grabowski know it wasn’t Sarge’s fault, but I can’t move. I guess my audio sensors are the only things online. It shouldn’t take this long to power up.
“Look, it’s your plan; your responsibility. That’s what Cap’n Fabron’s always sayin’.”
“Don’t quote Captain Fabron to me, Grabowski, just fix him.”
“Fix him? I’m a medic, Hem, I fix people. The human kind. This guy, I dunno, this guy needs a goddamned auto mechanic, or IT guy, or somethin’. Probably both.”
My optics begin to come back online and everything is all pixelated; it’s like the entire world’s been turned into an old school video game. For a moment I’m worried that I might have been damaged worse than I thought and my optics can only manage sixteen bit resolution. Then, I feel Grabowski thump the side of my head and everything is back in full focus.
“Hey, hey! Caveman technology! Works every time,” he cheers. I look at him and blink a few times while the rest of my systems finally lurch back online.
I look around. I’m not in the street anymore. I’m back at Fort Shelley in the medical center. I’m lying on a stretcher and I can feel the micro usb that’s attached to the back of my neck. I follow the cord to Grabowski’s power-house medical computer that’s sitting on a table nearby. On the screen is me; lines of my data scrolling, indicating which of my systems are operational and which ones are damaged.
“How did I get here?” I ask, raising myself into a sitting position. Grabowski’s look of accomplishment vanishes. He turns to his screen with Sarge over his shoulder.
“Whaddaya can’t remember?” Grabowski asks me nervously. “Uh, wh-what’s your name?”
I don’t really have a name, so I reply with the most obvious thing to me. “SRN: six-two-seven-eight.”
Sarge growls and rolls his eyes, “Not your number. Your name. What. Is. Your. Name?”
I don’t know. I don’t really have a name. They all just call me… aaw, shit. Seriously? “Is it Iron man? I don’t want it to be Iron man. I hate Iron man.” I mumble. And I do. I really hate being called Iron man. I like it better when Captain Fabron calls me Homme de Fer-- or usually just Fer for short. And I get that Homme de Fer and Iron man are literally the same thing, but Fabron’s speech is some kind of wild Frankenstein’s monster of English and French and it just sounds so much cooler.
“Alright, fine, whatever. Where are you?”
“Confederated Zone base, Fort Shelley.”


And I still remember it. I hold the old Santa hat in my hands as I sit on the sofa in my apartment. Picos’ booze was terrible and the pizza was cold by the time Fabron moved it down to us, but we honestly didn’t care. We were in the middle of the raging fucktangle that is the CZ, stuck at Shitty Shelley for Christmas, having the best damned holiday I think any of us ever had.
On the coffee table in front of me I have our squad picture and nine shots poured out for them-- the ninth is for Onda. She came in about a year later and not only replaced me as the rookie, but she was also another synthetic.
I rifle through my old foot locker. After... well, after-- we’ll just leave it at that-- I was given a few of their possessions. I got last pick after all the families. I pick up Gomez’s sunglasses. The lenses are cracked and one of the temples is missing but I polish them gently and put them down by her shot glass. Next, I take out a beat up medic patch and sit it by Grabowski’s shot glass. The next item I retrieve is Picos’ flask. It’s silver with our squad insignia etched into it on one side and ‘Picos’ on the other. One by one, I take out the only physical reminders of my old squad that I have and place them beside their assigned shot glasses. I have Jones’ boonie cap, Oxford’s crushed to hell and back cell phone, Miller’s pet rock, Judgey-- Judgey was sort of our unofficial mascot-- the slide from Onda’s side arm, and Captain Fabron’s pocket knife. One by one I sit them beside the appropriate glass. Then, I reach in for the final item. I pull out a matte black Zippo lighter. On one side the words, ‘Hem: Fort Shitty Shelley’ are scratched into it. I stare at it for a long time then use it to light the cigarette that’s been hanging between my lips. I sit the lighter down and stare at my pitiful treasures.
I miss them. They were my family in a way the Omegas can never be. I got my name with them. I learned how to navigate personhood with them. We were heroes together. We took some lives and saved a lot more. Then, one day, they were gone. Ripped away from this world in a maelstrom of rubble and fire. And while their souls-- if there is such a thing-- are at rest, their memories are still very much alive, and I still miss them.
I take a drag from my cigarette and exhale a smooth cloud of smoke-- I’m much better at handling cigarettes these days-- and place it on the edge of my ashtray. “So,” I say to the line of oddities on my coffee table. “It’s Christmas Eve. How’s Die Hard sound?”
Posted by A.J. Bass at 10:06 AM