We're just about to hit October and things are going to be pretty busy for me book/event wise. This is good,

for those of you keeping score.

First thing's first: Paige's Story was pitched to a literary agent and he's asked to read my manuscript. I'm not banking on him taking it, according to one of the more well-known, successful authors who works with him, the fact he's even looking at my manuscript is a big deal. So, stay tuned for further details on that.

Next, On October 19th, I'll be sponsoring the annual screening of The Rocky Horror Picture Show at The Gibson Theater here in Batesville. It's been going on for almost 5 years 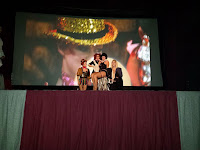 now and used to be sponsored by the local comic and game shop. Sadly, they closed. Rather than charging admission to the event, or getting rid of it altogether, I decided to sponsor it. My friend Charlotte will be arranging for The Denton Affair, a local acting troupe out of Cincy, to come and do their shadow show. (They are the bomb diggity, guys. Trust me.)

On top of that, we'll be taking donations for Safe Passage, a locally run
women's shelter for women and their kids who are looking for a safe place to get back on their feet. And with all the bullshit going on in the news with Brett "he was just a boy" Kavanaugh, we figured this was a more than worthy cause.

So yeah, come on out. Doors open at 11:30. The show starts at midnight. I'll be there collecting donations,

and selling books and merch. I'd love to have you drop by and say hi. Maybe buy a sticker and donate some items to the shelter.

Then, on October 27th 11am-2pm, I'll be at Three Sisters Books and Gifts in Shelbyville signing books.