A Taste of Things to Come 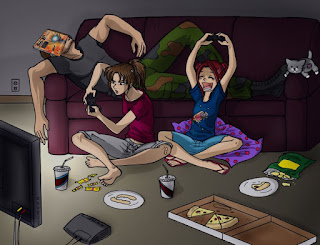 With publication looming ever closer, and the world being a giant, flaming ball of shit, I've decided to take a break from doom and gloom and post the back cover blurb of Paige's Story for the masses to check out. Read on and enjoy!

Also, if Paige's Story sounds like something you or someone you know might enjoy, spread the word!

When an explosion levels a secret lab in the dead of night, an experimental computer virus is unleashed on the world invading artificially intelligent workers and soldiers. Once infected, these synthetic humans experience 1 of 2 side-effects: Sentience or Corruption.

30 years later, the military and governments of the world are still struggling to cope with the shock. Synthetics are met with distrust by most, subjugation by some, and acceptance at arms-length by the rest.

To further study the rising sentience in the world’s robotic population, the military has recruited the best and brightest scientific minds to research this mysterious virus. Unfortunately for 13-year-old Paige Bryan, her parents are 2 of those minds chosen, and she finds herself moving to Fort Thomas - a military base full of sentient machines.

When soldiers start to malfunction and a strange little girl arrives, Paige and the scrappers of Ft. Thomas soon find themselves swept up in a mystery that, left unsolved, may mean the end of the already fragile peace between humans and synthetics.
Posted by A.J. Bass at 11:55 AM